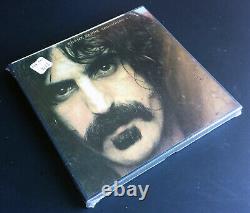 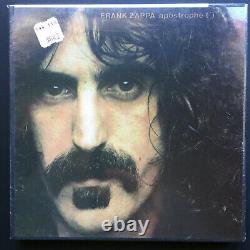 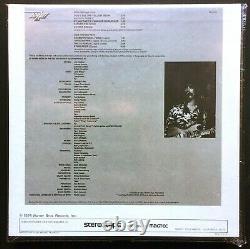 The box is not damaged in any way and there are no rips or holes in the shrink-wrap. This rare find is a SHRINK WRAP SEALED New Old Stock of one of THE most collectible commercial 7-1/2 ips 4-track tapes: The Stereotape / MAGTEC-duplicated issue of'Frank Zappa -Apostrophe. Is the eighteenth album by Frank Zappa. In both stereo and quadraphonic.

An edited version of its lead-off track, Dont Eat the Yellow Snow. Was the first of Zappa's three. Top 100 hits, ultimately peaking at number 86. Remains Zappa's most commercially successful album in the United States.

It was certified gold by the RIAA. On April 7, 1976 and peaked at number 10 (a career-high placement) on the. Continuing from the commercial breakthrough of Over-Nite Sensation. (1973), this album is a similar mix of short songs showcasing Zappa's humor and musical arrangements.

The record's lyrical themes are often bizarre or obscure, with the exception of Uncle Remus. , which is an extension of Zappa's feelings on racism featured on his earlier song Trouble Every Day. The first half of the album loosely follows a continuing theme. "Don't Eat the Yellow Snow" and "Nanook Rubs It" tell of a dream the singer had where he saw himself as an Eskimo. Alfonzo's Pancake Breakfast, which Zappa said was inspired by a television commercial for Imperial.

As was the case with many of Zappa's albums, Apostrophe (') was a melange of archival and recent recordings; side one of Apostrophe (') (1974) and Over-Nite Sensation (1973) were recorded simultaneously. The tracks on side two originate from various 1972 sessions with overdubs recorded in 1973 and 1974, except for "Excentrifugal Forz", where the drum track (played by Johnny Guerin) originally came from the Hot Rats sessions in 1969 along with the bass and drum tracks for "Lemme Take You to the Beach on Studio Tan (1978) and Läther (1996), although in the case of "Excentrifugal Forz" this is not actually noted in either the album liner notes or official correspondence, and "Stinkfoot", where the basic track, possibly originally known as "The Bass & Drums Song, dates from the Chungas Revenge sessions in early 1970. "Apostrophe (')" is an instrumental featuring bassist Jack Bruce and session drummer Jim Gordon , who was on tour with Zappa's band at the time of the session in November 1972. Bruce is credited on the album cover with bass guitar and co-writing the title song. However, in an interview for Polish rock magazine Tylko Rock he said that he had not played any bass guitar parts or done any co-writing on "Apostrophe (')", only the cello intro. He reminisced, "So I turned up in a NY studio with my cello, I'm listening to [Zappa's] music, pretty awful, and just don't know what to do with myself, and Frank [Zappa] says to me: "Listen, I would like you to play a sound, like this...

So I did what he asked me to do. That was my input to Frank Zappa's most popular record! [laughs] Bruce had studied the instrument at the Royal Scottish Academy of Music and Drama and performed with it on some of his other recordings. However, Zappa has referred to Bruce playing bass on the song in an interview: Well, that was just a jam thing that happened because he was a friend of (drummer) Jim Gordon. I found it very difficult to play with him; he's too busy.

He doesn't really want to play the bass in terms of root functions; I think he has other things on his mind. But that's the way jam sessions go. Village Voice critic Robert Christgau wrote in his review: Disillusioned acolytes are complaining that he's retreated, which means he's finally made top ten, but that's just his reward for professional persistence.

If anything, the satire's improved a little, and the title piecean improvisation with Jack Bruce, Jim Gordon, and rhythm guitarist Tony Duranforays into quartet-style jazz-rock. Given Frank's distaste for'Cosmik Debris' you'd think maybe he's come up with something earthier than Mahavishnu Orchestra, but given his distaste for sex you can be sure it's more cerebral instead. Apostrophe (') and Over-Nite Sensation , recorded with the same group of musicians, are the subject of a Classic Albums series documentary from Eagle Rock Entertainment, released on DVD May 1, 2007. In July 2016, the Zappa Family Trust released a CD of alternate mixes, different takes and live versions of material from Apostrophe (') titled The Crux of the Biscuit. It includes early versions of "Down in De Dew", which Zappa considered for Apostrophe (') but later included on Läther.

His work is characterized by nonconformity, free-form improvisation, sound experiments, musical virtuosity, and satire of American culture. In a career spanning more than 30 years, Zappa composed rock, pop, jazz, jazz fusion, orchestral and. Works, and produced almost all of the 60-plus albums that he released with his band the Mothers of Invention. And as a solo artist. Zappa also directed feature-length films and music videos, and designed album covers.

He is considered one of the most innovative and stylistically diverse rock musicians of his era. As a self-taught composer and performer, Zappa had diverse musical influences that led him to create music that was sometimes difficult to categorize. While in his teens, he acquired a taste for 20th-century classical modernism, African-American R&B, and doo-wop.

He began writing classical music in high school, while at the same time playing drums in rhythm and blues bands, later switching to electric guitar. His 1966 debut album with the Mothers of Invention, Freak Out! Combined songs in conventional rock and roll format with collective improvisations and studio-generated sound collages. He continued this eclectic and experimental approach whether the fundamental format was rock, jazz, or classical. Zappa's output is unified by a conceptual continuity he termed "Project/Object", with numerous musical phrases, ideas, and characters reappearing across his albums.

His lyrics reflected his iconoclastic views of established social and political processes, structures and movements, often humorously so, and he has been described as the godfather of comedy rock. He was a strident critic of mainstream education and organized religion, and a forthright and passionate advocate for freedom of speech, self-education, political participation and the abolition of censorship. Unlike many other rock musicians of his generation, he disapproved of drugs but supported their decriminalization and regulation. Zappa was a highly productive and prolific artist with a controversial critical standing; supporters of his music admired its compositional complexity, while critics found it lacking emotional depth.

He had some commercial success, particularly in Europe, and worked as an independent artist for most of his career. He remains a major influence on musicians and composers. His honors include his 1995 induction into the Rock and Roll Hall of Fame and the 1997 Grammy Lifetime Achievement Award. In 2000, he was ranked number 36 on VH1's 100 Greatest Artists of Hard Rock.

This item is in the category "Music\Other Formats". The seller is "reelhifi" and is located in San Francisco, California. This item can be shipped worldwide.