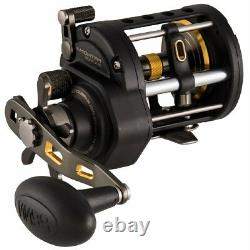 New for 2019, the Penn Fathom II Level Wind reels make a number of improvements on the previous generation, which itself was well received as one of the most durable Star-drag boat reels. Full metal body and side plates give strength and coupled with the stainless steel gearing and aluminium spool give you the power needed to play and land large fish. The levelwind system has been improved and reinforced. Penn's HT100 star drag system gives a smooth and consistent drag to help play fish. Another addition in the Fathom II is Penn's Fast Gear Access Sideplate which with the removal of just four screws allows anglers access to the entire gear box without worrying about losing springs or other small parts making home maintenance a much easier task.

The FTHII20LW has a wider spool than the similar diamiter 15 model giving you greater line capacity to cope with deeper water. It makes a good choice for general 20lb to 30lb bottom fishing and also for deep water drifting over the wrecks. This item is in the category "Sporting Goods\Fishing\Reels". The seller is "veals-mail-order" and is located in this country: GB.

This item can be shipped to United Kingdom.): 30lb